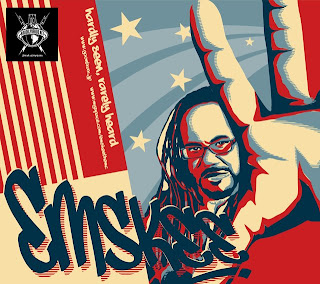 What's the word hip hop? The holidays are upon us, and if you read last week's Emskeeology, you'll get the reference that i hope your holidays will be, or can be, happy. In the REALLY realistic world, nobody talks about or acknowledges the dysfunctional family structures out there. If it applies to you, try not to commit any homicides. LOL

This week, i want to play on the term "dumb it down", by saying that there seems to be a surplus of "dumbin' it up" across all levels of life. Quality/substance is taking a back seat to marketing genius and quick turnover. It has been for awhile now. Many urban neighborhoods within the last 10 years are seeing the longtime fabric and foundation giving way to high-rise condos and other real-estate gains, but lack attempts to balance the culture in those neighborhoods, leaving those looooong time (i'm talking 30 plus years) residents to feel like aliens and forced to vacate.
Look at Harlem. Look at williamsburgh, and parts of Bushwick, Brooklyn. Look at New York City in general.
The worst thing that happened to New York was that first "Sex In the City" show.
Actually 9/11 changed alot quickly off the top. But when the show got popular outside of New York, it gave the city an image that everything is ok and care-free, and went right along with electing a mayor who was self-sufficient with family money. Anytime someone of noteriety gets to "run" an office or preside over a project, most times they aren't connected to the people, and don't have a pulse of what's happening WITH the people. Advisors and such always "find" the pulse. Mayor Bloomberg in my opinon, aside from creating these "chill-spot, cafe table" islands in midtown manhattan, and bike lanes everywhere, has actually done an ok job. He's a rarity. But he falls into the category of what i'm speaking of.
In the current day, we have the new chancellor of NYC schools, Cathy Black, who reportedly doesn't have any background in education, her children went to charter schools, and she believes that her marketing/organization prowess can cover for her lack of experience. It remains to be seen if she can, but again, off the top, it seems as if those who are "connected" to positions of influence are those who are given the chances to "experimentally" prove themselves. Thus the term, "dumbin' it up". Schools (and let's be real....the ones that need the help are primarily minority, inner city public schools) are in a state of crisis, and dice get rolled at the expense of those who, well, don't have a say in the matter.
I've heard it said that now that the middle class has all but disappeared, it's officially the aristocratic against the financially challenged. And we all know who the real opportunities belong to. They're "dumbing up" everything from the their disgusting influence on the quality of music, film, prime-time television (that's actually been going on a looooong time), advertisement, etc.
I may sound like a bitter spirit to some, but i'm definitely not wrong. The word and action has always been to create a BALANCE of accomodation. No, everyone cannot be appeased. But, the way things continue to progress, it's almost as if life were food and there's no salt to give it some taste. We're headed for a collision with supreme blandness, just because "the dumb uppers" wanna have their fun. I could go on further, but if you've read this far. You're in tune to the REAL pulse of the world. Support culture. Support foundation. Support purpose....and not just convenience. Class dismissed.
Always, check my group The Good People at www.thegoodpeople.bandcamp.com. Solid hip hop/soul...with our pants pulled up and room at the ankles. Big up to Ife Dancy for Wu-Tang classics all week on the site!!!
Posted by Emskeeology on Tuesday, November 23, 2010