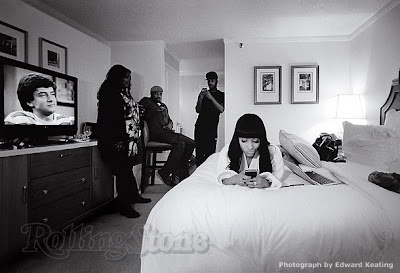 Like many people, I find Nicki Minaj quite interesting, but her album hasn't been out a full week and she's already crowned "Queen".

While she has proved she can roll with the boys, and doesn't mind a challenge (Lil Kim), I think Ms. Minaj should be given some time before trying on a Queen's shoes. That's a big role to fulfill, plus there are so women that have come before her that is just as deserving of that title who can spit as well, maybe better.  MC Lyte, Rah Digga (who also has a new album out "Classic"), Lauryn Hill, a triple threat, she can sing, rap, and act. This list even includes Foxy Brown and Lil Kim. Lil Kim was rocking the crazy hair and wacky outfits back in the day. The list gets longer.


Nicki is not a self-proclaimed reigning Hip Hop Queen, but people tend to read "Rolling Stone" magazine as a music bible, and generally once you make it in there, you've made it in the pop culture aka a whole bunch of white folks like you now(don't get mad at me for saying it. I'm being real here!!).  But what does this really mean for Nicki's future?  Now people are looking at her as the "Great Female Hope", "The best and greatest thing in Hip Hop in a long time"...  Can she handle the pressure? Or am I just another hater? Actually, not at all.

All eyes on you Ms. Nicki Minaj...

Here's the link to the Rolling Stones article.
Posted by Ife´D. on Tuesday, November 30, 2010