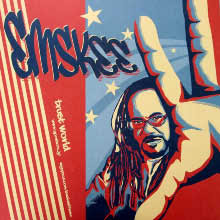 Salutations hip hop. For this weeks edition of Emskeeology, i want to speak on something that has undoubtedly changed since it's creation many, many moons ago, but is still a highly sought-after position because of it's power. The position of the DJ.

I'll start by saying that because of the technology rush in the last decade, sadly anyone or everyone can consider themselves to be a dj. Get yourself a decent computer, buy the most fitting program that caters to your needs, up and download a rush of the hottest mp3 files, and boom.... you're instantly whoever your favorite dj is (in your mind and dreams that is).
Before the computer, the dj was the backbone of many hip hop groups that kept the party grooving before, during a stage show, and way into the morning light hours. And to have that honored position, you had to be GOOD, meaning having your own sense of style while keeping the spot bumpin'. Dj's entertained and TAUGHT the crowd about music that they might not have known about and MADE them like it by the way they rocked it into the mix. NO ONE told them how or what or when to play. Many times the turntables were either elevated above the crowd or closed off. If you even tried to step beyond the barrier, you got shut down QUICK by security or the dj's boys who craved to handle the trespasser. I've seen it happen.
I have a few points.
One, there are TOO many djs behind turntables all over the world now that shouldn't be that are directly and indirectly preventing the really talented ones from truly shining rightfully. Two, because of point number one (and commercial radio....which is a whole other subject for another time), the flood gates were opened for unknowledged club and bar owners who champion the non-djs who bring their 50 to 300 flock following friends, who in turn drink alot and push up the bar numbers, which make these dj's seem like legends, which make the owners happy, which support invitations to come back to spin again and again......you see where this is going??? All these things are happening without a true, developed vibe in the venues. It's all monetarily driven. Rightly so, as we live in a capitalist society, but a balance can be achieved with that word i always like to use. Balance. If a skilled dj has those same 50 to 300 friends, that's a good thing. At least he or she is CONTROLLING the vibes and not spinning the hottest, wackest selections just because certain patrons feel empowered by feeding them with money to play the same songs, 3, 4 or 5 times a night.
An authentic dj is not a jukebox (for those that know what that is). As a matter of fact, when you finish reading this post, check out a song called "Respect The Dj" (http://www.youtube.com/watch?veGVJHzMG_4k - on my solo album "Hardly Seen, Rarely Heard" in Japan early last year on Goon Trax/Media Factory Records) that was released as a single. It will tell you everything you need to know.
I learned how to spin by listening to and watching some of the illest of all time. If you're currently wanting to learn techniques of how to REALLY rock a party, google and study video and/or mixes from Kid Capri, Clark Kent, Tony Touch, Dj Spinna, Mister Cee, Larry Levan, Tony Humphries.....or under the radar but amazing heads like Qool Dj Marv, Dj Domewrecker, or Jeannie Hopper. Hell, i'll even throw myself on this list. I get it in on the cuts and blends PROPERLY. LOL Just remember, a real dj spins a DIVERSE BLEND of music.
I could go on forever going into the history, various ways to spin, the art of the blend, and so on. But there's only so much space here. Besides, i don't trust that your interest and attention span are that deep. LOL Next time you're in a spot, especially you young, untamed mind, bravado heads who think the spot is yours when you walk in and think you can control a GOOD dj, fall back into your fake player position and let he or she work the decks a little before you start harrassing. You just might find that GOOD dj helping your rap to that cutie that much easier. Hating quick is like pre-mature ejaculation. That ain't cool. You DO wanna be COOL....don't you?
Remember to check www.thegoodpeople.bandcamp.com. That's my hip hop group's site (The Good People). We have a few albums for listening pleasure, AND we'll have a new xmas song called "A Good Xmas" posted for free download this coming weekend.
As always, love to the world y'all. Peace.
Posted by Emskeeology on Thursday, December 09, 2010